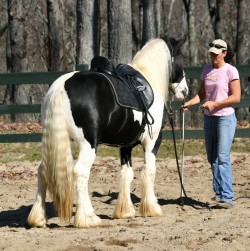 From the legends of Romulus and Remus to the clash with Carthage during the Punic Wars; from the cruelty of Caligula to the reign of Constantine, the Rome that was once a small agricultural village became one of the largest empires in the Ancient World. Before Attila and his gang, along with some Visigoths and some Vandals sacked the city of Rome herself, this great empire expanded its territory and dominated the Mediterranean for 1200 years. How was this accomplished? By Leadership, Determination, and Skill. The Romans knew that the power lay with the controller of boundaries and the owners of land. So, before I bore you to death with anymore parallels in classical antiquity take hold of the lead rope and think like a Roman, because it is all about territory.

UNDERSTANDING BEGINS ON THE GROUND

As it is with every creature in the animal kingdom, from children to grandmothers, from chicken to chimps, there is a pecking order which is established by one thing: territory and who controls it. Whether it is a favorite toy, a bargain on the sale table, a juicy, fat worm or a bright banana, someone is going to submit. Your horse is no different. Every time he lifts his head just out of your reach, or hits you with his shoulder, or walks in front of you, or leans on that foot you are breaking your back to pick up to clean, he is controlling his territory and yours. Sometimes it is obvious, and other times so very subtle it may go unnoticed by you. But, to be sure, it is very deliberate on his part. And when we let him use us for a scratching post, we just dropped down so far in the pecking order that even the weanlings are laughing at us!

Before we start on your territorial campaign, I'd like you to keep a few thoughts flashing in the back of your mind.

1) Be Believable: your focus is to convince your horse to trust you, not fear you.

2) Be Brave: your focus is to be honest, not perfect

3) Be Patient: your focus is the process, not the product.

In my view, these are the three most important tools you can take with you to the barn. They build confidence, courage, and self-control in you and your horse.

Unlike people, horses don't care where they are in the herd's hierarchy, as long as they know where they are. It is important to note that while it may not look to you as though the pecking order amongst your horses has changed in the last five years, you can be certain that their positions are re-established daily. That is why your horse will continue to 'check' and see if you are still over him today like you were yesterday. He will actually find new and creative ways to test this regularly, to which you must be prepared to answer consistently every time. How? Move his feet and take his spot of turf, literally.

You can begin with this basic exercise to train your horse to respect your space. Start first by keeping his head off of you. Now, if you just push him away he will think it is a game and he might push you back.  To avoid this use one or two fingers to press behind the jaw until your horse moves his head. When he does move, immediately stop the pressure and look away. You will probably have to repeat it many times until he believes you really mean it. Don't quit! Challenge yourself to outlast him. If the lesson today is nothing but to keep his head off of you, then let that be the lesson. If every time he tries to maul you with his head he runs into your fingers, he will stop. With his belief in your commitment (defined as your absolutely-will-not-yield attitude) comes respect. You win. Incidentally, if you don't feel comfortable using your hand, you may certainly use a training stick. Just remember, whether hand or stick, the pressure is touch-press, not POKE.

Once you have the hang of it, hold the pressure behind the jaw longer. Like an immoveable object, hold it there and ask for a bigger commitment on her part. This time you want her to move her head and her front foot. When she steps to the side remove the pressure and look away. You just took your first bit of territory! Practice over and over...pressure, release, pet. Now, when I say 'pet', I don't mean so much affection that her brain turns to oatmeal. Just stroke her briefly to let her know she did what you asked.

At first, allow your goal to be one step to the side. The next day, two steps. Use only as much pressure as it takes for her to learn. Decreasing the pressure gives her a sense of accomplishment. And you, too! Ultimately, you will ask her to do a 360 degree turn without touching her at all. She will simply move out of your way as you take that space. Always, ALWAYS practice on both sides. Count how many times you work on each side and document it in your training journal. It might feel awkward for you on one side or the other, but make yourself do the hard side first. I often find myself purposely schooling on the right side as to educate that eye more, resulting in a much braver horse.

You can apply this exercise to different parts of your horse's body to move her feet and take her territory. Pressure to the flank moves the hip over. Pressure on the chest moves her backward. When she moves like you are asking her to, step into that space, remove the pressure and look away. Then give her a quick pet. Let her rest. Walk her around a bit. Then start again. Control yourself and don't fry her brain.

Lastly, be aware of your body position. For you to communicate clearly, your posture, position, and expression must be consistent with one another. Face your chest the direction you want your horse to go, place pressure on the area you want to yield, look directly at that spot on the horse. When she moves her feet (yields), remove the pressure and look away. This way your hand, body and expression are in unison, communicating a clear message. When your horse finally believes that you are always going to be dominant, she becomes a more secure, trusting partner. When she knows where her position is and can depend on you to be the same every time, the challenges to your authority become fewer and fewer. Eventually, an eye flash from you is all it will take to remind her of her place.

In ROME, we learned that to gain respect you must conquer some territory. What does it take to conquer anything? Confidence, Courage & Self-Control..... and good old-fashioned aggression.